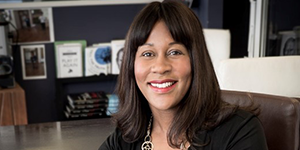 Karen has been in media for 20 years, currently running the largest media agency in the UK, MediaCom. In her role as CEO, Karen controls £1.2bn of media billings, manages over 1,083 people and in 2014 led the agency to win over £119m of new business. Karen has also been personally recognised in the industry, featuring twice in Management Today’s 35 Under 35, and five times in the Power List of the UK’s 100 most influential black people – most recently this year, where she came in at Number One.

In 2012 Karen launched an apprentice scheme encouraging young people from all backgrounds to get a foot in the door of the industry. She is also a Trustee of charity Adopt a Better Way and was one of the finalists in the Veuve Clicquot Business Woman Award 2014. In June 2014 Karen received an OBE in the Queen’s Birthday honours for services to Media and Communications.

A bit more about Karen;

Karen is a single mum of a beautiful 5 year old boy called Isaac.

A child of the 70’s, Karen was brought up on cricket being the daughter of 2 Bajan parents. Karen follows the highs and lows of the West Indies Cricket team and is hoping Isaac will share her love of the sport (his 2nd birthday present was a bat, ball and stumps!).

Karen calls her spiritual “home” Barbados, where she regularly returns to see family and friends, and to unwind with a glass of rum, sprite and Angostura bitters.

Weekends are spent in Chiswick or Nailsworth in the Cotswolds, enjoying the outdoors and horse riding.