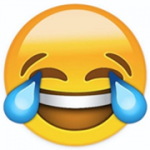 In further recognition of the prevalence of adblocking, the term “ad blocker” made it to the shortlist for the Oxford Dictionaries 2015 Word of the Year, but was trumped by the ‘Face with Tears of Joy’ emoji. It was the world’s most used emoji in 2015, according to Oxford University Press and SwiftKey, a mobile technology firm. SwiftKey identified that this emoji made up 20% of all the emojis used in the UK in 2015, and 17% of those in the US: a sharp rise from 4% and 9% respectively in 2014.