Lack of Color
Issue: Code of Ethics – Health & Safety
Result: NOT IN BREACH 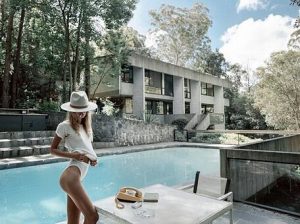 This internet ad is a product listing for a hat and depicts a woman next to a pool with a cigarette in her mouth. The complainant’s concerns were that “the woman is wearing underwear, clearly and unhealthy weight and smoking cigarettes in the ad”. The Panel considered that the woman’s pose appears contorted and unnatural and noted that the woman’s right arm does appear to be very thin, and her thighs appear to be thin. The Panel considered it likely the image had been edited, however considered that a strange pose was not of itself a breach of the Code.

The Panel noted that the ad did not show the woman’s ribcage, stomach, or back and considered that it was difficult to determine whether the woman was malnourished or unhealthily thin. Without further imagery, her frame could not be considered to be contrary to Prevailing Community Standards on health and safety in relation to body weight.

The Panel then considered the complainant’s concern that the ad depicts smoking. The ad has a 1970’s theme, by the depiction of a rotary phone; the architecture of the house and shows the woman standing by a pool with the large house in the background. The Panel considered that the overall impression of the ad was aspirational and that fashion/glamour style of the ad amounted to a suggestion that smoking is a sophisticated activity. Consistent with its previous determination the Panel considered that presenting smoking in a positive or aspirational manner is contrary to Prevailing Community Standards on health and safety and determined that the ad did breach Section 2.6 of the Code. Read the report.

Fatblaster
Video: https://youtu.be/OR85RjeZlFU
Issue: Code of Ethics – Health & Safety
Result: NOT IN BREACH
In this TV ad, brand Ambassador Leisel Jones, speaks to camera about FatBlaster shakes saying “Being asked to be a bridesmaid, that was the moment I decided to lose weight. So I’m going on the FatBlaster clinical shake program, and I’d love you to join me”.

The complainant’s concerns were “it sends an offensive message to women (and girls and adolescents)”. The Community Panel considered that the ad relates to an individual woman wanting to lose weight for her friend’s wedding so that she thinks she looks nice in photographs, and asking viewers to join her in completing the program. In the Panel’s opinion there is no suggestion that a person’s worth or value is related to their body size or shape.

In the Panel’s view most members of the community would be unlikely to view this ad for a weight loss program as advising that a woman is only of value if she is thin and married. The Panel considered that the ad did not depict material contrary to Prevailing Community Standards on health and safety. Read the report.