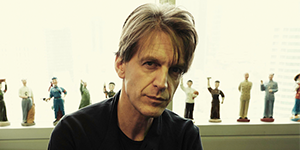 With over 20 years experience, Graham has worked across seven different agencies – including Saatchi & Saatchi London where he created the iconic British Airways ‘FACE’ commercial with Hugh Hudson and a cast of 6,000.

During the six years as Executive Creative Director at M&C Saatchi, the agency won the most creative awards in its 15-year history.

Graham is behind some of the advertising world’s most celebrated images and campaigns including British Airways, Silk Cut, Benson & Hedges, Land Rover, Dixons, Ariston and many more.

His work has won him global recognition as one of the most respected, and highly awarded, creative minds. Accolades include Cannes Lions, D&AD Pencils, One Show Pencils, LIAA, EPICA, Clios, Spikes, British Television Arrows, Campaign Press and Poster Awards. He has also been presented with four BAFTA’s.

Graham started his career by dressing up as an old man. After art school he applied for a job at London’s then top creative agency, Collett Dickenson Pearce, and was told they did not hire students. He returned the following day dressed up as an old man and was granted a place.

He went on to become the youngest ever D&AD President in 1996 and was voted into the Art Direction Book, representing the world’s top 28 Art Directors. In 1997 he moved behind the lens to start directing and in his first year was nominated for a BRIT award.

In 2001 he set up his own production company, Thefinktank – a conceptual production company. Graham is a great believer in nurturing young talent and launched TheArtSchool in 2005 (described as Britain’s most radical art school), holding sessions in venues as diverse as the House of Commons.

A keen photographer, his work has been used in numerous campaigns including the 2012 London Olympic Games Bid and Canon. By 2014 he curated his first solo art exhibition ‘Nomads’ comprising of photography, painting and animation at renowned London gallery, Riflemaker.

His most recent exhibition, Drawing with my Eyes (2015), has propelled him into the spotlight with international coverage and recognition. For this he designed his own software in collaboration with Tobii (the worlds leaders in eye tracking) to allow him to draw portraits with his eyes.

Based in Shanghai, Graham continues to lead over 300 budding creatives in over 20 offices at O&M China. He believes in a single-minded approach to creativity and lives by his favourite David Ogilvy quote; ‘search all the parks in all the cities in the world and you won’t find a statue of a committee.’